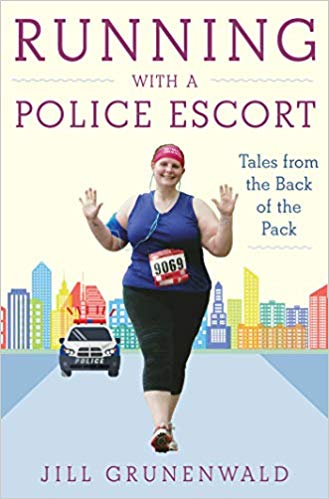 I don’t remember where I first heard about Jill Grunenwald or her brilliantly titled, Running with a Police Escort. I do remember, however, being very disappointed that it was constantly checked out at my local library (having previously taken an oath to use the library and take a break from building the ridiculous collection of books in my tiny apartment).

Then, on the morning of my 44th birthday, shortly after having run the 2019 Paige’s Butterfly Run with my good friend (and first-time 5K runner) Caroline, I decided it was time to start running again. I hadn’t run anything except the Butterfly Run in at least a year. And besides, I was losing weight but starting to plateau, and I knew running would kickstart my weight loss. Plus, I’d always enjoyed running, I just kind of … stopped?

So on my birthday, I ran 5 miles. I didn’t know I was starting a daily running streak, I just set out to run. Here I am 20 days after my birthday, and I’ve run every single day since then for a distance of over 100 miles. But why am I telling you all this? Because I think Jill might be the reason I’ve kept this streak up so long.

Running with a Police Escort is the author’s story, or collection of stories, really, about how she became a runner and then her journey through the world as a runner. But not just any kind of runner, a self-identified SLOW runner. Now, I can relate. I’ve had people ask to run with me only to reflexively tell them, “I’m slow. Really slow.” Which is a) super subjective and b) an apology that’s not even required. But it’s something we slower runners do, and often when we do it, what we’re really saying is, “Oh, I’m not a real runner.”

And Jill’s “Tales from the Back of the Pack” is really a collection of stories whereby she discovers (or reminds herself) that she IS, indeed, a real runner. And often, because of her position in the last place, trailed only by a police cruizer bringing up the back of the pack, she’s a runner with a literal police escort.

So is Running with a Police Escort a book only for slow runners? Or only for runners? No, although runners will definitely relate to Jill’s love for the sport (I often found myself wanting to go out for a run, even if I’d already run that day, after putting the book down). The book is for anyone who’s ever suffered from imposter’s syndrome, or who’s ever felt like they don’t belong. And what’s wonderful about this book is Jill’s ability to embrace (over and over again) what many would view as weakness or “lack of” in her running and champion it, and by extension, herself. Like a lot of things that are running-related, there are some big life lessons to be learned from Jill’s experiences.

I’m an avid reader. I devour books. Usually, once I’ve finished one, I’m so eager to move on that I quickly forget what I’ve just read (no joke – I once bought the same book THREE times, only to discover the second two times when I started to read it, that I had in fact already purchased and read The Lovely Bones) but that’s not the case with Jill’s essays. In fact, not only can I not seem to let go of the book in my brain, but I’m wondering if I should hit up some races in Cleveland and see if I can share a police escort with her one of these days.

In the end, I’m glad I broke my “buy no more books” rule and squeezed this excellent set of life lessons into my tiny apartment, as I’m sure I’ll be returning to them over and over.